Although all airlines suck, you still have to pick one. So I picked United. I fly a lot so they pretend to treat me well (as long as it doesn't cost them anything).

All I really want is the "stealth luxury" of being left as un-molested as possible at the airport. That's why United 1K's like me board first and pick window seats: Get on, slide over, and leave me alone! 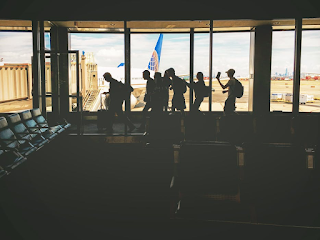 But then there is the question of boarding lines. How can United get us on the plane without having to stand among ... people?

A few years back, United implemented a five-line system, where each boarding pass had a numbered boarding group and a corresponding numbered lane at the gate. This took up a lot of room, but the hope was that it would avoid the scrum known as "boarding a plane in France".

Sadly, this did not work out as well as people like me hoped. Apparently people are too stupid to look at the big, bold, boxed number on their boarding pass and stand in the corresponding line. And these lines tended to spill out across the terminal, blocking annoying-electric-carts and business-people-with-somewhere-to-go with equal efficiency.

United's five-group system annoyed me for another reason: Group 1 was simply too big. Everyone in first, plus everyone with 1K or platinum status, is a lot of people. Add in the can't-read folks and those that thought the "priority boarding" benefit of the MileagePlus Explorer card meant Group 1, and I'm stuck in line trying not to breathe in the fumes of your tuna sandwich.

So now United has a new two-lane system. Lane 1 starts with Group 1 but then becomes "people in higher groups who missed their group being called". Lane 2 is every other group in order. And it kind of works, too, apart from the whole matching-the-numbers issue.

But the best part is pre-boarding for 1K's. Yeah that's right suckers, I can get on with the families full of baby strollers and military dudes with duffel bags!

Now if only they could figure out how to treat paid First Class passengers with some kind of decency.
Posted by Unknown at 9:56 AM

Labels: Good Times on the Plane