Working for a Narcissist (or What Have I Done?)

Not all bosses are great. Not all are good. Some are downright bad. This is a hard lesson I've been learning recently, having taken a job under an egomaniac narcissist that makes the guy in the White House look sane. 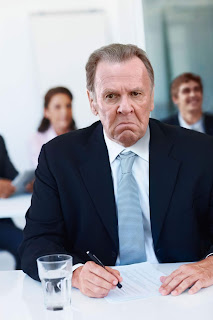 A few months ago, I accepted a new position with a smaller firm in my industry. Overall it's been a great move, since I'm able to do whatever I want all day long, which usually means making a big impact for my clients and getting lots of work done. I was already pretty well-known in my industry (thus the clever nom de guerre here) but now I'm able to really get my (real) name out there.

When I started at my new firm, I was thrilled to be given the leeway to take time to fly to conferences, present my work, and reap admiration far and wide. Hell, they even let me reschedule billable business and sales calls so I could fly to Vegas!

But then I noticed something off developing. The Big Boss started coming with me. And not just attending - he would stand at the side of the stage, then wrangle his way onto the panel, or jump into my conversations. This guy is nobody in my field, apart from a business manager, but here he was stepping in to introduce himself.

And not just give his name, either. "I'm this guy's big boss," he would say. "I took a big risk taking on a rock star like this, but I think you can see it paying off!" Nothing wrong, I suppose, but for the tone. Increasingly every conversation was about how smart he was and how well the firm was doing.

I started feeling like the ballplayer signed to a big contract to draw attention rather than to score points. And I guess I was.

It all came to a head recently on a trip to New York. The Big Boss emailed me, "pack your things for three days in the Big Apple!" Yeah that's how he talks. There was one hilarious element to the trip that I'll blog later, but this is about what happened when we landed.

So we cab it to Wall Street and go to the first Big Meeting. Big Boss introduces me as "my new guy, maybe you've heard of him" and we chat. But my alarm bells were ringing.

First issue: We're at Starbucks, not the 61st floor.

Second issue: We have no agenda, and this guy isn't a buyer.

Third issue: We don't discuss anything of importance.

Yeah, it's one of those meetings. Followed by six more that Tuesday. Followed by drinks (not steak) at the Bull and Bear with some old college roommate or something. Then another day of the same thing, but with less meetings. Then like two more coffees on Thursday before our flight home.

This wasn't a sales call. It wasn't even a business meeting. It was a metaphorical hand job for a narcissist showing off his new trophy.