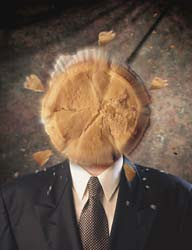 Let's be honest: this has absolutely nothing to do with consulting.

Back in 1996, just under a year after my grandmother died, my grandpa married grandma's best friend. He was 88, she was 85.
Go Grandpa! He apparently likes the younger women.

Enter the entire extended family with whom we now have to spend every holiday.
Cough...I mean...step-grandma's extended family.
Let's just say that they don't like us very much.

Most of them are Fundamentalist Christians, and think we (my mom, dad and younger sister) are a bad influence on the world in general, which is probably true.

Everyone knew things were going to go south when, one or two years into Grandpa and Step-Grandma's marriage, my family went to Easter at their house. As usual, we spent the full hour car ride arguing en route to the "Party." When we arrived, we were hardly thrilled to be there.
My mom knocked on the door with attitude.
(Track with me on this) Step-Grandma's Daughter's Second Husband's Father, who just happens to be an 85-year-old, uber-Christian PREACHER, answered the door.
He greeted us with "Happy Easter!"
My mother, who later would disavow any and all knowledge of this event, returned his greeting with "Yeah - Crappy Easter to you, too."

So began our relationship with Step-Grandma's extended family.

Now, a little over 10 years later, we're all used to each other. They don't like us any better, but they're used to having us around.

The Thanksgiving routine is constant: there is lots of jello salad, the same people bring the same things, and everyone is very "proper." The women cook and clean, and the men watch.
Generally I'm able to stay out of it, since I live far from the family now, and because I have strategically avoided sharing my email address with anyone even remotely related to the group outside my immediate family.

The Bliss ended this year when my mother got the bright idea to share it with everyone. Now I'm screwed and on the email list.

Here's how the last two weeks have been spent. I'm calling it the Great Pie Debacle of 2007.

I am not making this up, and have included my commentary in red.

Jan (Step-Grandma's Daughter in law) wrote:
> Hello Everyone,
> Just wanted to confirm that everyone is invited to our house for Thanksgiving at 2:00 pm! We'll provide the roast turkey, gravy, mashed potatoes, and Sara's (Step-Grandma) legendary cornbread stuffing! (Spencer (who is about 10) may also experiment with a recipe from one of his cookbooks.) Let me know what ya'all would like to contribute...

> If any of the additional clan, or any other friends or family can join us - please do! (Please let me know numbers so we can set up seating.)
>
> Happy Holidays!
Jan

Hi -
Sounds great for Thanksgiving. I can bring a molded salad.
Mary Anne (my actual aunt)

What in the world is a molded salad? I'm guessing it involves Jell-O.

Evelyn
I originally said I would bring salad, but I would be happy to bring pies instead if you would like a change.
Connie (Step-Grandma's daughter)

Ooooh! Bring it! Evelyn ALWAYS brings the pies. This is like challenging Evelyn, who is about 80, to a duel.

What would you trade for one of your pies?

They are priceless.
Mary Anne (Dad's Sister - the only one appreciating my Dad's jackass-ness)

Thanks Connie, I really do want to make pies.
Evelyn
uh oh - Evelyn's bringing it!!

Evelyn and Jan, Sorry! I just thought you might have been interested in a change because you have so faithfully spoiled us at every gathering. I have to admit that I am pleased to be able to look forward to your pies. It was a scary thought to try baking in your shadow. Jan, I will go back to bringing a salad unless there is something else you need to fill in.
Connie

Oh and Connie CAVES under the pie pressure!!
She's relegated to bringing salad once again.

Welcome to my family, or non-family, to be more precise.

Next time I'll tell you about the time my mother sat at the dinner table and pretended to have an orgasm (imitating "When Harry Met Sally") in front of the extended family, including the Fundamentalist Christian Preacher, his wife, and a few others.
Now THAT was a good time.
Posted by Crazy Consultant at 9:29 PM

Labels: Listserves and You, Randomness