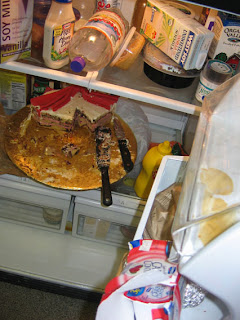 I just cleaned out the client's refrigerator.
No - I am not making this up.
The damn thing really smelled. Like REALLY smelled. To the point that we were all starting to think that either someone down the hall had really bad BO, or that maybe a wet dog had snuck into the office, hidden, and then spontaneously died. Wet, dead dog smell.
Nope!

It was the fridge.

The problem was, the source of the stench wasn't obvious.
I started with the top shelf. There were three yogurts - all mine - and all within the expiration date. There was also a mysterious piece of tupperware containing...nothing, and a ziploc bag of strawberries. Nothing smelly.

Bottom shelf: my liter of gatorade - available to anyone should they show up to work hungover. The gatorade is almost gone, but not smelly. Then we have the nearly empty jar of peanut butter. Weird looking, but not smelly. A turkey sandwich. Not smelly. OOOH! Goat cheese. Somewhat rancid, but still within the expiration date. Kind of smelly.

A little miffed that there wasn't an obvious culprit, I just pulled everything out. I threw away the goat cheese just to be safe, and then strategically placed the garbage can out in the hallway. Let the hallway smell if it must, just not our office!

Maybe what this fridge needed was a good dose of lysol. The thing is, the client is too cheap to have lysol. What we have is this yellow aerosol can that says "Spray and Disinfect!" The exclamation point is apparently to suggest that I should be excited about cleaning.
I'm not.

In fact, it smells so bad that I think I need to leave. I'm leaving.

We have brought new meaning to the term "scope creep."
Posted by Crazy Consultant at 4:01 PM