We've all heard the story by now: United is cruel, because they body-shamed some little girls over their leggings. United is vicious because they beat up some old guy and dragged him off the plane. And American is just as awful because they almost punched a baby and took away his mommy's stroller. Oh, what a world!

Since I fly a lot, my friends and family have been quick to ask my opinion on these issues. Since I fly United, they seem to want me to declare "no mas" and switch to Southwest or something. 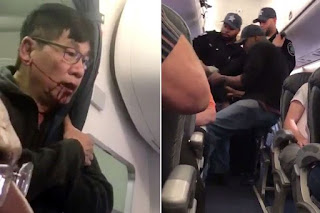 They've been surprised by my reaction.

The Facebook class has these bullshit social media sensation stories exactly backwards. Each is a story of a passenger behaving badly and the (admittedly deplorable) treatment they got in return from the beleaguered employees of once-proud businesses brought low by mass consumerism.

Frequent fliers know of, and respect, United's non-revenue passenger dress code. Those girls were flying non-rev and dressed against the code. I only wish United would turn away more of their paying passengers who dress inappropriately to be seen in public! At the very least, the airline should stick to their guns and forbid non-revs to dress like the rest of the animals on the plane.

It's telling that "legging-gate" only happened because another unrelated passenger blew the situation out of proportion with an ill-informed analysis of the situation. While smartphone cameras have brought much illumination to many deplorable situations, this wasn't another black guy getting beaten by police. It was a pair of privileged girls acting inappropriately while flying for free. Boo hoo.

Then there's that guy who was beaten and dragged off a flight. No one deserves to be beaten up by the cops, but there comes a time when we all must obey the rules. It was stupid for United to let everyone board and then ask passengers to give up their seats, but it's completely within the rules. In the grand scheme of things, "miss your flight" is barely even a first-world problem.

Yet this guy persisted, resisted, argued, and fought with the police when they came to get him. What planet are you from? Every day, passengers gripe and moan and complain about how the big, bad airlines treat them. But everyone should know that they must obey the orders of a flight attendant and a cop, at least in as far as those orders are the likes of "get off the plane". This really isn't a United story. It's a cops overreacting story. And that's barely even news these days.

Finally, I turn to the flight attendant who almost punched a baby while grabbing the stroller his mommy was bringing onboard the plane. Here's the thing: You can't bring a stroller on a plane. The gate agents inform people with strollers of this fact. There's a big pile of strollers off the plane right before you get on.

And he didn't punch a baby. He didn't even come close. If I had a dollar for every time I was almost punched I'd have a few, but yet I (amazingly) remain un-punched to this day. And yet American suspended the poor schlub anyway!

In all three cases, "do-gooders with phones" thought the best way to deal with a situation they didn't understand was to film it and share it. This is the real story: Everyone wants to be part of a social media sensation instead of stepping in to defuse a situation or even learn the basic facts.

And the airlines? They're just big horrible companies with poor customer service. Which we already knew.
Posted by Unknown at 12:00 PM

Labels: Good Times on the Plane, In the News

Excellent post! Honestly, it's sad that my first reaction to these "social media" events is: OK, but what is the video not showing...I have plenty of time to be outraged if outrage is justified, but let's withhold outrage until we know what really happened.

Why don't you post more? You've got a great writing style and most importantly you accurately and vividly capture the mentality of a consultant's life in a way a consultant can relate to and an outsider can at least sympathize and somehow relate. I mean, there's Fishbowl, but consulting from the writer's perspective elevates the mystique. Keep up the good work!