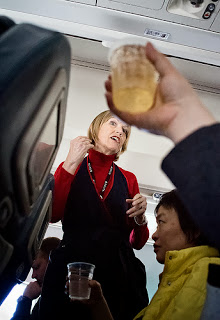 The airline business is like nothing on earth, and airline people are some of the most common interactions we consultants have. I thought I would take a minute to note some of the crazy words that come out of their mouths.

Weigh in in the comments if you've got more to add!
What are your favorite examples of airline doublespeak? Or am I just being a prick? Sound off in the comments!

Photo by MarkNye
Posted by Unknown at 9:00 PM

Great article! Humorous and informative. Funny how we tend to rename everything!

You've made some excellent points and some of your examples are hilarious. I know that I used the term "endless loop" for many years, before I found out that it was a technical term. I had grown up programming and then I went into the software field. So saying "he talks in an endless loop" was just one of those things I said. When I switched industries, I realized it was a niche term. Fortunately, I was otherwise good - I knew "I haven't got the cycles" was a mainframe computing term and it was usually people much older than me who used that in the first place.

Great post. Have you noticed the guy, (it is usually a guy), that cna wait to be seen taking over the phone before the door opens? those are the losers of this world.

I used to be a consultant chasing customers, now thanks to the SFM System, the customers call me and leave messages in my post. Isn't that increible? I love it!

I love plains when you are not travelling on business.

nice article! very interesting, I love travel when it comes to business