When Cockroaches Take Over the Client Site Bathroom....and Other Scary Stories 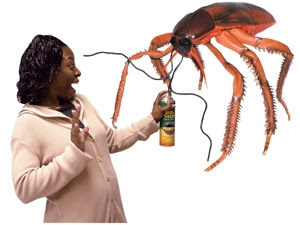 Given all the recent scandal surrounding the good Senator Larry Craig, bathroom etiquette has been at the top of mind lately. I mean - I'm now very much aware of what the feet in the stall next to me are doing. Here at the client site I'm currently at, we have designated our bathrooms as "No-Tap Zones," just to prevent any and all foot-tapping related/Larry Craig-type issues.
This morning at approximately 10:54 I went down the hall to the bathroom. By 10:55 I secured a stall. Trying to be an alert bathroom-user, I glanced at the feet of the person next to me - just to make sure they were complying with the "no-tap regulations."
Thank God, the person was complying.
What was unfortunate, however, was the fact that two large cockroaches were innocuously loitering near the feet of my compliant neighbor. One seemed to notice me, and started making his way into MY stall.
Now - let me pose this very important question:
What is proper etiquette in this situation?
Does one:
a) let it go and pretend to ignore said large cockroaches
b) scream loudly and create sudden bathroom panic, or
c) Immediately leave stall without flushing, etc.
I opted for choice A. The problem was, I didn't want to lift my feet in fear of being seen as a "bathroom foot tapper." Knowing my luck, if I did, the person in the stall next to me would flash a police badge under the stall wall and point at the nearest exit.
Crap. No pun intended.
Trying to maintain a modicum of poise as the two cockroaches were now making themselves at home in my stall, I kept quiet. They're cockroaches - they can survive nuclear war - show some damn respect!
I left the stall at approximately 10:57am. At the sink, three more cockroaches appeared on the floor. They tried to look innocent, but these guys were clearly taking steroids or something. Either that or they've been drinking the mysteriously discolored liquid that comes from the client site drinking fountain. I swear one actually LOOKED at me.
My hands were now clean but I felt exceedingly dirty, surrounded by all these unnaturally large arthropods.
I grabbed a paper towel, hit the button that makes the door automatically open (God forbid I should touch the door handle) and exited the bathroom. It was now 10:58.
Reporting back to the project team, we have all been avoiding the bathroom since that time. It is now 2:25pm. The problem is...I kind of have to go to the bathroom again.
I think I'm going to start using the one down the street at Starbucks. I can always use more caffeine anyway. Plus - there's only one stall there, so no one can accuse me of tapping my feet in a questionable manner.
_____________________________
UPDATE:
For those of you who are not familiar with the Larry Craig scandal, shame on you. Read a newspaper.
Or...fine...just watch this - a genius Dragnet-style re-enactment of the "issue" that appeared on MSNBC:
Posted by Crazy Consultant at 1:19 PM

Pardon me for the un-delicate (or is it in-delicate?) nature of my query...but this though provoking exposition on bathroom etiquette has blossomed within me a certain curiosity about my own recent experiences on a client site.

For one, what is the proper protocol when a cockroach wanders into your stall and starts tapping one or more of its many legs? What should I do should a cockroach roam its fingers, or in this case, legs, along the bottom of the stall? What to do if it actually touches my foot? Looks through the gap between the door and the frame?

Finally, what is the appropriate reaction if it asks me if I can "Spare a Square"?

Ummmm - so would squishing the bugs with your shoes constitute foot-tapping???

I was in the bathroom once and saw a roach using a urinal and I was like:

And I was like:
"Aren't you going to flush"

“Wash your hands, or legs, or what ever”